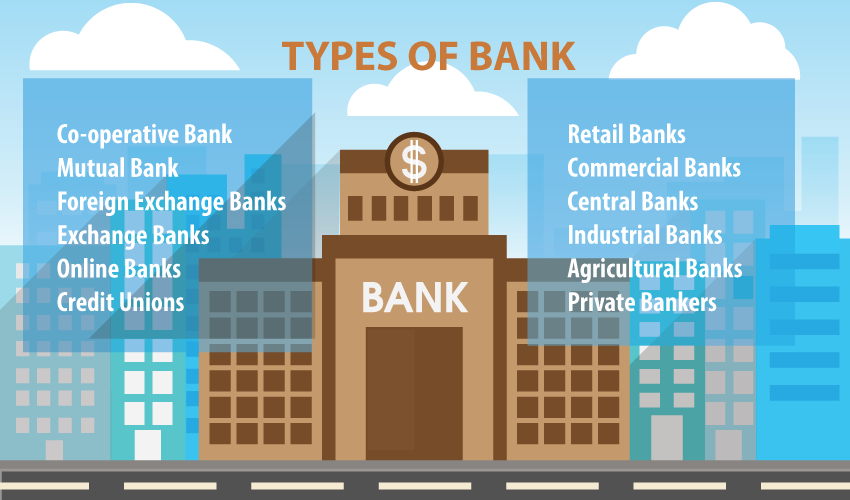 An institution which is financial in nature and is licensed for receiving funds, managing withdrawals, and making loans is called a bank. Banks can be of several types depending on their functions. Here you can get a clear idea on the most important types of banks with definitions and description. The names of the different types are as follows:

Each of the types is discussed below:

You are probably most familiar with this type of banks. You may have your savings or checking accounts in a retail bank. A retail bank’s focus is on their consumers or on the public for making them, potential customers. You can get loans, credit cards and debit cards from these banks. These banks have numerous branches in different locations of populated areas. According to Statista world’s third top retail bank was China Construction Bank in February 2017.

Business customers are the focus of the commercial banks. Businesses also need savings and checking accounts as the individuals do. But their nature of services is more complex and amounts of the money or transaction numbers can be quite larger. They may require accepting customer payments, depending heavily on lines of credit for managing cash flow, and may use letters of credit for doing business overseas. Commercial banks accept different types of deposits such as current deposits, savings deposits, seasonal deposits, fixed deposits, recurring deposits, etc. Businesses can get several types of advances and loans from commercial banks such as loans, overdrafts, cash credits, and discounting bills. As per Investopedia, Industrial and Commercial Bank of China was the top commercial bank in the world in April 2017.

Read More: Types of Bank Accounts with the Description

The specialized banks providing finance for foreign trade are known as foreign exchange banks. Deposits are accepted by these banks from the public. Generally, these banks have branches in different foreign countries to ensure their services in an uninterrupted way. But recently commercial banks are performing this task too. Bank of America Merrill Lynch is one of the top foreign exchange banks of the world.

The banks which function completely online and have no physical branches where the customers can visit are called online banks. Many banks having physical locations also provide online services like viewing accounts and paying bills online, etc. But online banks are different. These banks sometimes give competing rates on savings accounts and they especially provide free checking. Ally Bank of the United States has become the top among the online-only banks in 2019.

Credit unions and banks are similar, but these are customer-owned non-profit organizations whereas banks are mostly investor-owned. Products and services offered by credit unions are mostly identical to those of commercial and retail banks. The members of credit unions have some common characteristics such as their area of living, their working place, their occupation, etc.

Article Published By Typesof.Net
Previous:
Types of Financial Statements with Explanation
Next:
Types of Budgets with Definitions & Description