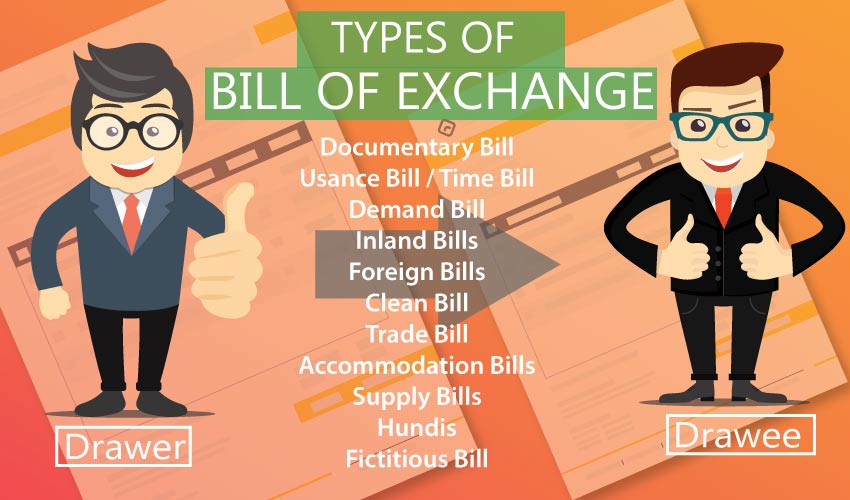 An instrument used for settling debts is known as bills of exchange. It involves writing of an unconditional order by the drawer or creditor to the drawee or debtor for paying an amount, either immediately or on a fixed date for received goods’ and services’ payment. The immediately paid bill of exchange is called a “sight bill” and the bill paid on a fixed date is called a “term bill.”  The bill of exchange turns to a post-dated check and a binding contract between both parties after receiving, accepting and signing of the bill by the payee.

The difference between the bill’s face value and the money received practically is called a discount. A bill of exchange’s drawer may or may not give a discount depending on the terms and conditions between the seller and buyer.

Types of Bill of Exchange

There are different types of bills of exchange. They are as follows:

Each of the types is described below:

The bill of exchange which has the supporting documents confirming the authenticity of the transaction or trade which has occurred between the buyer and the seller is known as a documentary bill. Receipts, invoices, railway bills, bill of lading, etc. may be included in the documents but not there is no restriction to include these documents.

Documentary bills can be of two types:

Documents delivered against the bill’s payment is known as D/P bill. The documents are held by banker after it had been delivered until the bill’s maturity.

Documents delivered against only the bill’s acceptance is known as D/A bill. The bill becomes clear or nullifies after the delivery of documents.

Usance means the law allowed period between the bill’s date and the bill’s payment. Usance bill is also known as time bill because the time for the bill’s payment is specifically mentioned on it. It is viewed as a time-bound bill as it mentions specific time and period on it.

A usance or time bill is adequately stamped while drawing because it attracts different stamp duty varying based on usance period and the bill’s value.

The bill drawn between 2 parties residing or located in the same country and payable also in that same country is known as inland bills.

The bill drawn between 2 parties residing or located in two different countries is known as foreign bills. For instance, a bill is drawn in the USA where the seller is located, and the buyer lives in the UK. So, the bill will be payable in the UK, the drawee or buyer’s location. It is the opposite of inland bills.

Foreign bills can be divided into two types:

A bill, drawn by an exporter in another country for an importer of our country is known as import bill.

A bill, drawn by an exporter of our country for a party living abroad is known as an export bill.

A bill which doesn’t contain any document of evidence is known as a clean bill. These bills have a higher rate of interest than other bills with documents because no involved documents are available.

A bill drawn for the transaction of a trade order is known as a trade bill. These bills are commonly seen in international trading.

A bill, drawn or accepted or endorsed whatever may be the condition, is called accommodation bill/ house bill. These bills are generally, drawn on one another by concerned groups for serving borrowing purpose from banks where no actual transaction occurs.

A bill drawn by a contractor or supplier on the government department for supplying specific goods is called a supply bill. The motive of supply is utilized for obtaining cash against payments which are pending from financial institutions for meeting financial requirements. Though it is easy for the government departments to get loans in cash from commercial banks, generally, they don’t accept this type of business.

Hundis are bills of exchange or promissory notes which are native in nature and are generally, used for inland trade and agricultural financing. These are popular among traders in India because hundi’s origin is in India. The term “Hundi” came from the Sanskrit and it means ‘to collect.’ This negotiable instrument is available in different native languages in India. Among them the following are mentionable:

These are like demand bills i.e. payable at sight.

Dhani is an Indian local term which means owner. This hundi is similar to bearer cheques as its holder becomes a holder in due time if he considers it for value.

As per this hundi, the payable amount is to be paid to the person whose name is written on it.

This hundi is only payable to a Shah means a respectable wealthy person in the market.

A bill where the name of the drawer or the name of the drawee, or both are imaginary or fictitious, is called a fictitious bill. These bills are not good bills and are unenforceable by law. But if a genuine person accepts the bill it turns into a good bill provided that he is capable of showing that the bill’s first endorsement and the drawer’s signature have the same handwriting and he (the acceptor) is liable for the bill’s payment.

Article Published By Typesof.Net
Previous:
Types of Financial Statements with Explanation
Next:
Types of Business Report with Description