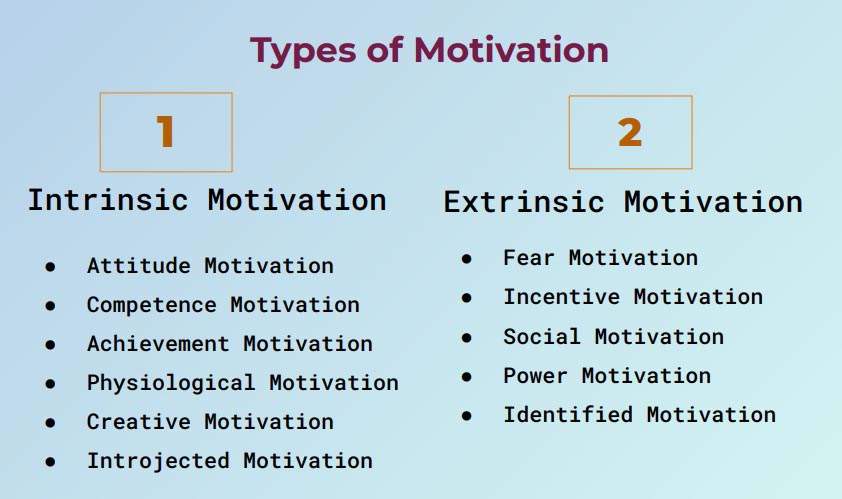 Motivation is the action of initiating, guiding and encouraging someone to be goal-oriented so that they act inspired and achieve great things. This inspiration can be felt from within or someone else can ignite such feelings in others.

Based on the source of the motivation it is majorly divided into two types – Intrinsic and Extrinsic Motivation which can later be further divided into more categories.

Intrinsic Motivation is the underlying agenda of doing something. When people do something for the fun and excitement of doing it, that is their Intrinsic Motivation. Intrinsically motivated people act on their internal motivation rather than the fact that they are looking to get a reward for it or trying to avoid some negative outcome.

Attitude and motivation are very closely connected and it highly depends on one’s attitude as to what would motivate them. When someone’s thought process and behavioral conduct are influenced by something within that is called Attitude Motivation.

The sense of personal achievement can act as motivation at times and that is called Achievement Motivation. People who are achievement motivated are usually driven to achieve goals so that they can climb the ladder of success.

Introjection indicates an unconscious process of internalizing someone else’s feelings as one’s own. In the case of Introjected Motivation, people internalize the negative comments or reviews of their effort and that works as negative intrinsic motivation for them. The negative feelings of guilt, anger and bitterness often build inside the people which motivated them to finish the task but that cannot be very good for the person’s psychological health in the long run.

Extrinsic Motivation works from the outside and hence, the name. When someone does something for the rewards promised or the applause to follow, they are extrinsically motivated. Doing something for the sake of doing it is not the agenda under this kind of motivation.

Fear can scare people into getting jobs done. Fear becomes the motivation for the job and that would be Fear Motivation. Fear is a negative motivator but it has proven to be very effective when it comes to getting things done.

Incentive Motivation is when the possible rewards after any task would work as the sole motivation behind doting it. This kind of motivation usually works in any situation where financial gain is involved. For example, employees promised a higher payscale are highly motivated to pursue the goals set for them.

This kind of motivation depends on the act of socializing with people and in turn, relating to them. This kind of social affiliation can also work as strong motivation and that’s why it can be labeled as Social or Affiliation Motivation. Praising the employees’ efforts can build morale and that can motivate them more than money or incentives can.

Simply, possessing the power to change a situation motivates some to achieve great things and this kind of motivation would be classified as the Power Motivation. History shows how motivated people have felt when given power over other people’s lives.

Negative external motivations nudging someone to get something done, do not always manifest the due consequences right away. This kind of motivation is identified far before it is actualized and in turn, takes effect in people and that’s why they are labeled Identified Motivation. For example, printing graphic lung-related health outcomes on the cigarette packaging does not necessarily motivate people to quit smoking right away but they identify the issue. Bigger or more tragic things related to it must happen before someone takes it really seriously as maybe the death of any fellow smoker due to lung cancer. Only after that, the depth of the issue may be realized and a few may finally be motivated enough to quit smoking.

Article Published By Typesof.Net
Previous:
Types of Financial Statements with Explanation
Next:
Types of Boards