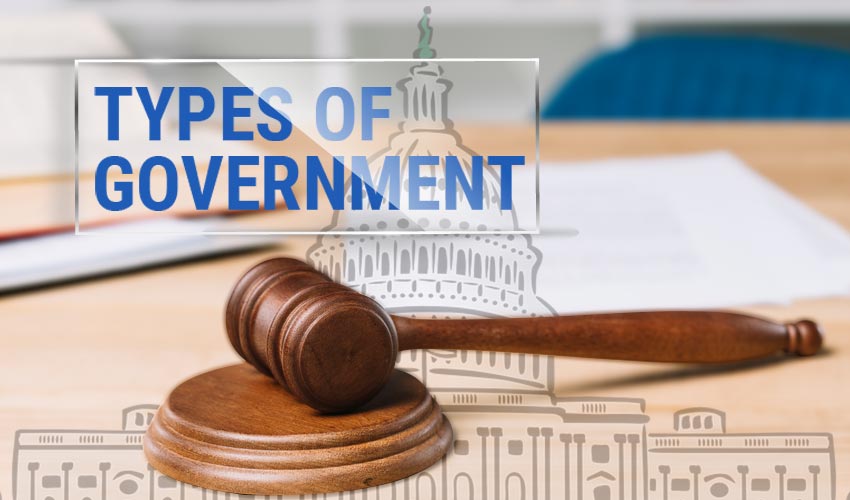 Government is a familiar term which refers to a system governing a unit or community or state. It is composed of a group of selected or non-elected or elected people. You may have used this term several times either to praise or to criticize the government. Here, you will know the types of government which may help you to use the term with a proper understanding of it.

The government can be of various types. Among those seventeen are the most mentionable ones.

Each of the types of government is discussed below with examples.

Anarchy is the situation when there is no government in the country or state or nation. Under this situation, public services or utilities are absent, there is lacking regulatory control, diplomatic relations with other countries are limited, and society is mostly divided into various fiefdoms or autonomous regions.

After 1991’s civil war and the fall of dictator Said Barre, Somalia entered a state of Anarchy. Then gradually, with the international community’s involvement and a constitution’s passage, Somalia was established as a ‘federation’ or a partially self-governing states’ union.

A type of government, where non-elected government officers perform public responsibilities as specified by supervisory policy-makers is called bureaucracy. Under this type of government, rules, procedures, regulations, and results are formulated to prevent favoritism, maintain order and achieve efficiency within the system. It’s quite rare to see bureaucracy as a form of government, rather it’s sometimes used as a mechanism to strengthen the overall form of a government. Policy implementation in a bureaucratic order can occur under a democratic or a dictator rule.

Bureaucracy helped to equalize and formalize the taxation system in Great Britain. The United Kingdom was involved in an arrangement of military campaigns throughout the world during the eighteenth century, and it established a strong taxation policy to finance the efforts of the war. The United Kingdom used improved technology and focused on efficient collection techniques and thus, established a network of the largest public administration in the world at that time.

Aristocracy is the type of government where wealthy nobles have power over the people belonging to the lower socioeconomic class. Leadership or ruling positions are basically hereditary and held for the elite class. Under this system, the ruling class possessed the genetic traits, upbringing and education needed for rulership. This system connected ethnicity and wealth with the right and ability to rule.

The word and the concept of the aristocracy (aristo means excellent; krato means power) both were derived from ancient Greece. The complete power was under a monarchy in ancient Greece. According to Plato the concept of aristocracy consisted of “philosopher kings” who had the intellectual curiosity and knowledge to rule along with the bloodline and needed wealth. In this modern era, the meaning of qualification and education has totally changed from the concept of the aristocracy. Nowadays aristocracy is defined as an inherent and unequal type of government where a minor class of wealthy elites rules the major population.

Practically, colonialism means expanding a nation’s rule beyond its own boundaries. The ruling nation occupies the indigenous populations and exploits the resources for their own benefit. Sometimes, the colonizers impose their own culture, economy, the form of government and religious order on the occupied people for strengthening their authority.

The European monarchies started nautical explorations during the fifteenth century in search of indigenous cultures whose way of living and technology were primitive in their view. The British, Dutch, Spanish and French colonists extended their authority and influence around the new world, damaging and often eliminating entire population and cultures in that process. The race for occupying North America, the systemized destruction of Native American culture, establishing 13 original Colonies, and the slave trade are some mentionable examples.

Capitalism is the form of economy where private owners drive production. It encourages open competition. According to supporters of capitalism, it ensures economic growth, broader prosperity, higher productivity and well standards of living. But as per critics, it promotes inequality, unsustainable use of land and resources and exploits labor class.

Capitalism has several forms, from corporate and state capitalism to laissez-faire economy. At present, the United States can be called a liberal market economy where firms are engaged in open competition within the existing market mechanism and hierarchies.

Democracy is the type of government where people can directly choose their leadership. Democracy is characterized by free and fair elections, the rule of law, preservation of human rights and civic participation.

In this modern era, over half of the countries of the world claim that they have constitutional democracies. Bangladesh is one of those countries.

Communism means the concept of the economy’s public or common ownership including methods of production, utilities and infrastructure. It was idealized by Karl Marx and Friedrich Engels.

A social structure which revolves around military obligation, nobility, and land ownership is known as feudalism. It divides the society through hierarchical divisions into small parts like peasantry, clergy, noble classes and the like.

France during the 11th century is especially mentionable for the power’s decentralization and the rulership’s splitting into several smaller entities.

Federalism is the type of government which divides and combines powers between an array of local and regional authorities and a centralized federal authority.

The United States is a true example of a federation.

Meritocracy is a system where authority is entrusted in the people who have displayed the merits considered suitable for public administration or governing. Sometimes, these merits are determined through academic credentials and testing.

Singapore is a modern example which matches closely to the idea of meritocracy.

The type of government where the ruling party has either retained power, come to power, or both, by means of theft and corruption.

During the early 1990s, Soviet Russia under the leadership of Vladimir Putin is a plain example of kleptocracy.

Monarchy is a type of rule where authority and absolute power are held by a royal bloodline’s single member.

At present monarchy exists in 45 countries of the world. Saudi Arabia, Qatar, Brunei, Oman, Morocco, Monaco, Swaziland, and Liechtenstein are worth mentioning among them,

The military dictatorship is the type of government where a nation is ruled under the absolute power of the nation’s military force without any democratic process.

Thailand is under a military dictatorship since 2014.

Socialism means the type of government where the primary ways of production are owned by the people. According to supporters of socialism, it strictly ensures resources’ equal distribution and shared ownership. Some argue that socialism can coexist with free market capitalism.

It is an authoritarian type of government where there is no limitation in the ruling party’s power, either in the private rights of its citizens or in public life.

North Korea claims itself as a democratic people’s republic but truly it is the plainest example of totalitarianism at present.

Theocracy is the type of government where a certain religious ideology determines the laws, customs, and leadership of a nation.

At present, Iran is the most prominent theocratic country in the world.

A central authority is absent in tribalism rather different regional tribes claim to various domains, resources, and territories.

Tribalism exists in Afghanistan at present.

Article Published By Typesof.Net
Previous:
Types of Financial Statements with Explanation
Next:
Know About 10 Different Types of Businesses