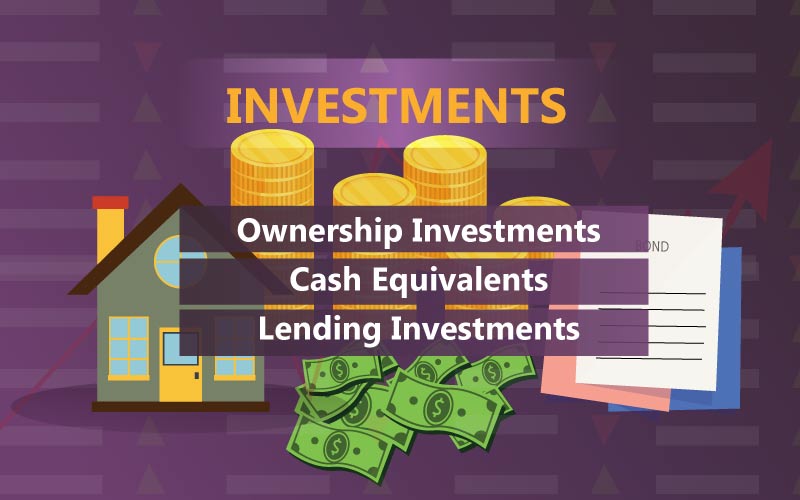 The term 'investment' has become confusing because of overuse. People always refer to a bond or a stock as an investment, but now they make investments in their studies, their cars, and even their mobile phones. Let’s have an idea of what is the actual meaning of investment.

There are basically three types of investments. They are as follows:

Each of the investment types is explained below:

Ownership investments are the investments which mostly comes to your mind whenever the term "investment" is used in front of you. These are the most profitable and volatile type of investment. Some examples of this investment are given below:

Literally, a stock is a certificate saying you own a company’s share or portion. In a broader sense, all securities that are traded whether futures or currency swaps, are ownership investments where you only own a contract. If you buy any of these investments, you will have a right to a company’s value’s portion or a right of carrying out a specific action (as per the futures contract).

Your expectation of earning a profit is determined by the market value of the asset of which you own the right. Suppose, you own shares in Apple Company and it announces a record profit, then other investors will also want Apple shares. The price of the shares will go up because of their demand for these shares. This will, in turn, increase your profit if you want to sell these shares.

Apartments, houses or other types of dwelling which you buy for renting out or repairing and reselling are investments. But the house where you live is a different thing because it is meeting a basic need. It meets your shelter’s need and it may also be appreciated over time but should not be purchased with a profit’s expectation.

The money which you use to start and run a business is a kind of investment. Entrepreneurship is a very difficult investment because here you need something more than money. Accordingly, it is an ownership investment to having extremely large probable returns. Entrepreneurs can generate huge personal profits by producing a product or service and then selling it to potential customers. Bill Gates, Microsoft’s founder who is one of the richest persons in the world, is a bright example.

A signed Lionel Messy jersey, Da Vinci paintings, and gold can all be deemed an ownership investment if these objects are bought with the reselling intention at a profit. Though precious collectibles and objects are mostly not a suitable investment for several reasons, they can still be considered as an investment. For instance, a house, it has a physical depreciation’s (damage) risk and requires maintenance costs which decrease eventual profits.

Cash equivalents are investments and it can be easily converted back into cash. Examples are as follows:

Money market funds give a very small return, one percent to two percent, and the associated risks are small too. These funds are more liquid than other types of investment, i.e. checks can be written out of money market accounts like checking accounts.

Cash equivalent investments are not planned for long-term investment motives e.g. retirement. After paying taxes the returns are often so low that can’t keep pace with inflation.

You can be the bank by lending investments. These investments are less risky than ownership investments and so returns are also less. An issued bond of a company will pay a fixed amount over a specific period, whereas a company’s stock may double or triple or more in value and thus will pay far more than a bond. Again, the stock can lose seriously and can even go bankrupt, in such case bondholders generally get their money but the stockholders sometimes get nothing. Some examples of this investment are given below:

Debt instruments where an investor is loaning money to an agency (the issuer) or a company in exchange for periodical interest payments along with the return of the bond’s face value at the bond’s maturity date are called bonds. The government, many states, government agencies, municipalities and corporations issue bonds. Typically, a corporate bond may have a $1000 ‘s face value and pay semi-annual fully taxable interests. Municipal bonds’ interest is government tax exempted and state tax exempted for issuing state’s residents. Interest on Treasury bonds is taxed only at the government level.

The returns and risks differ widely among several types of bonds. But, lending investments give a lower return and have a lower risk than ownership investments.

You can be called as an investor even when you have nothing but only a regular savings account. You are lending funds to the bank which it allocates in the loans’ form. Now the return is quite low, but the risk is also minimal or next to zero.

Article Published By Typesof.Net
Previous:
Types of Financial Statements with Explanation
Next:
Types of Government with Examples