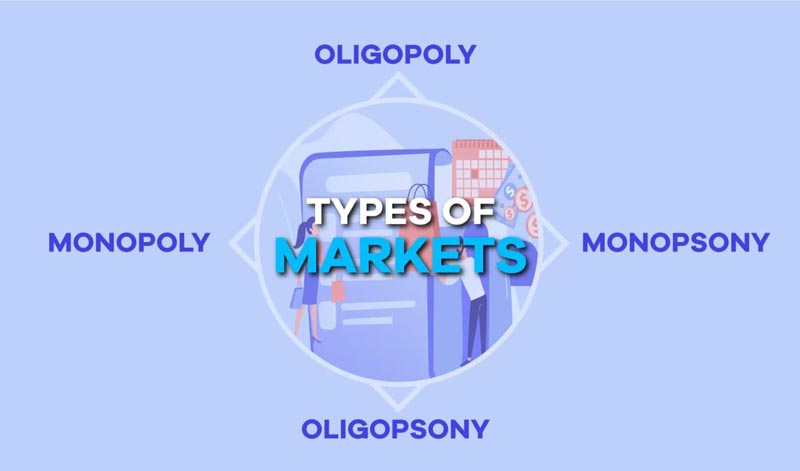 A market is a place where the potential buyers and sellers come in contact with one another to finalize a deal and trade commodities or services at an agreed-upon exchange rate. The market system is one of the fundamental issues based on which markets are classified into numerous types. The market system is the regulated process that determines the buyers and sellers as well as the means of exchange.

When there is only one seller against a huge number of buyers in a market with nearly no good enough substitute or competitor, they enjoy a complete Monopoly. It happens when one brand takes control of one specific commodity or product in a market and other brands take time to catch up to them in quality or availability and as a result, the buyers keep choosing that one single brand every time.

In a market, when there is only one buyer but a number of sellers, that is the Monopsony scenario. For example, an employer becomes the sole buyer against multiple sellers when a good number of prospective employees are willing to sell their labor and skillset to him/her. Since the buyer here has the control, s/he can set up the rules as they please with a view to sorting through the lot and pick the best.

Latin words - olígoi meaning “few” and pōléō meaning “to sell” joins to make the word - Oligopoly which indicates that there are only a few important sellers in a market system. In some industries, there are only a handful of companies selling differentiated yet similar types of products, and the buyers choose from similar products that are differently labeled under different brands and sold at a slightly varied price but the parent company is often the same. For example, in the United States News and Media market, the top six media firms (Walt Disney, Time Warner, CBS Corporation, Viacom, NBC Universal and News Corporation) own around about 90% of the US mass media market.

Contrary to oligopoly, when there are a few important buyers in one market, it would be an Oligopsony. A good example would be the US food industry where fast-food giants like McDonald’s, KFC, Wendy’s and Burger King buy a lion’s share of the total meat produced in the US by the local ranchers. Their control over the total production of meat gives them the power to dictate the price of meat in general and that would be the example for Oligopsony for you.

The markets that have tangible existence are called physical markets. Customers or buyers can walk into these markets in person where the seller(s) has already set up counters or stalls to sell their products. Shopping malls, super shops and vendor’s markets can be good examples of Physical Markets.

The markets that do not have a physical existence outside of the internet or the computer screen are usually called the virtual market since they only exist in the virtual realm. They are also termed as Non-physical or Internet Markets. Online shops and e-commerce websites are good examples of Virtual Markets.

The markets where ready consumer goods are sold are called the Consumer Markets. These final goods are seen stocked on the shelves of the stores before being sold to the average consumer and they range from foods, clothing and jewelry. The price is often fixed by the sellers and the bargaining also ends on their terms.

In this type of market, goods or services are not sold to the consumer themselves directly but to other businesses. This is the trade between businesses which can be done in exchange for services or goods or it can be money. The price or exchange rate is often a point of discussion and only agreed upon when both parties are satisfied.

Auction Markets follow the bidding method where the highest bidder gets the product concerned upon the interactive back and forth bidding. The price here remains undecided until the very end of the auction and ends up being decided by the buyers and how much they are willing to pay for the product being auctioned off.

The air of globalization hasn’t escaped the market systems and the expanse of businesses. Global Market would be a market that is expanded beyond national borders. Companies wanting to go beyond the border of the nation they were born in, are increasing by the day. Brands with their biggest global presence would be Coca-cola, Microsoft, Xiaomi etc.

Black Market is a shadow economy where illegal goods and services are sold under the radar so that the government-regulated prices can be tweaked to the convenience of the seller or so that the tax can be avoided. Illegal drug deals, human trafficking etc. are usually done exclusively in the Black Market.

8.  The Market for Intermediate Goods

This is the kind of marketplace where various financial assets are traded starting from money to bonds, debentures etc. Since this kind of market deals in financial aspects, the market is labeled Financial Market.

The Capital Market sees the deals of long-term assets such as houses, lands etc.

Stock Market is a type of Capital Market where already-issued securities change the hands of the investors.

The real-time transactions between the buyers and sellers are done with cash and those are done in the Cash Market.

In the Future Market, the financial transactions are done but the deliveries are expected at a certain date in the future which is set in the present.

Foreign Exchange Market is the market where national currencies are traded on a global scale. It is also known as the FOREX Market or FX Market.

The fixed claims or debt instruments like bonds, certificates, debentures, bills of exchange, leases, promissory notes etc. are traded in the Debt Market.

This kind of market is regulated by a centralized organization and the transactions happen in a physical setting between buyers and sellers.

These are online marketplaces regulated by decentralized organizations where the brokers and dealers deal via the internet using their computers or other smart devices. Over-the-Counter Markets are often shortened to OTC Markets.

Article Published By Typesof.Net
Previous:
Types of Financial Statements with Explanation
Next:
Types of Plagiarism and Definitions